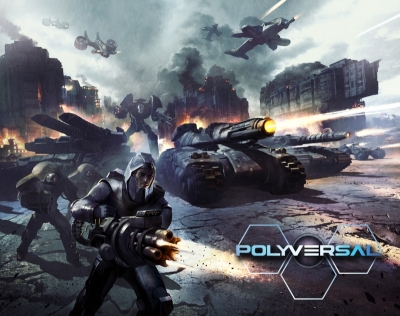 Polyversal Base Game (No Minis Option) 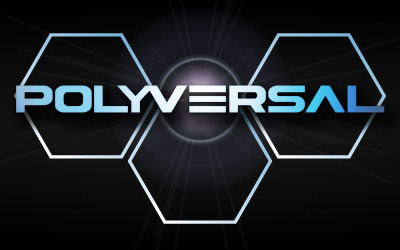 After a long-awaited successful Kickstarter campaign, Polyversal is now available for purchase. The game comes with or without miniatures. This product, CEW00009, is a preorder of the "no-minis option" which gives you everything you need to play except the miniatures and combatant tiles (which you can add and design). For a base game WITH 2 battlegroups of miniatures, please see CEW00010.

"Polyversal is a tabletop miniatures game that puts you in command of an army set in a plausible-future Earth."

Polyversal is a universal tabletop miniatures game for two or more players designed by veteran gamer Ken Whitehurst and developed and published by Collins Epic Wargames (known for their award-winning Spearpoint 1943 line of card wargames). The system is intended for use with 6mm scale miniatures, but may be used with larger 10mm or 15mm miniatures if desired. The game uses color-coded polyhedral dice and Combatant Tiles to reflect the combat qualities of your units, their weaponry, attack ability, evasion, effectiveness, and more.

"Polyversal is a revolutionary gaming system for sci-fi tabletop wargaming and has been in development for nearly a decade."

"A level of crunch in the app to make units, and streamlined gameplay makes it a perfect combination for me." - Lee Sweeney

"Every mini I've been hoarding for 30 years finally has a use!" - Charles Lewis

"Full marks to the Arsenal app, very easy to use. Also the rules allow plenty of variation so models that would have been very similar to other models in other rule sets can be made different in Polyversal" - Tim Snoddy

"The game is quick, it’s tactical and has a great command and control mechanism, so it’s perfect for playing large sci-fi games."  - Mike Hobbs

"Polyversal has a lot going for it; an engrossing story line and framework for gamers to help build upon and expand, astounding art from Bruno Werneck, a self-contained box set with elegant, streamlined rules that you can put right on the table, and an open system from which you can adopt your own models to, in any timeline you wish." - Review by Maurice Fitzgerald