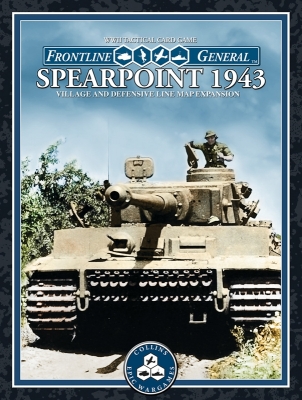 The Spearpoint 1943 Map Expansion is the second game in the Spearpoint line.  Set in a Summer 1943 Italian Village and a Winter Italian Defensive Line, which also doubles as an Eastern Front setting, the Map Expansion takes Spearpoint 1943 to a whole new level of tactical immersion.  Dive into fictional scenario intros by author Mark H. Walker, realistic artwork by German artist Marc von Martial, and well-tested rules that seemlessly tie it all together with the original Spearpoint 1943 game and its components.  Play tense new Standard Games and Situation Games that set up differently every time using versatile die-cut terrain tiles such as buildings, ruins, minefields, bunkers, trenches, emplacements, and more!  Optionally play the game with 15mm Miniatures in place of the original game's cards.

Nominated for a 2013 Origins Award in the Historical Boardgames Category.

"Adding the map expansion to Spearpoint 1943 turns a fast, fun, minimalist card game (these are good things) into a reasonably fast, fun, and challenging simulation. The improved visual impact of the two-sided map board with the feature tiles that enable every game to have a unique layout significantly enhances the "feel" of the game. Likewise, the addition of line of sight (LOS), movement, and a number of rule tweeks because of these new features have made this game much more "objective based" than the basic game. Even when playing the "standard" game in the expansion, it seems to have more of a point than just accruing 51 of them. The eight included scenarios take this to another level as you march through a sequential and well-written fictional Italian campaign with PFC Andy Migliore." - Bill Fuller

“This expansion really takes Spearpoint 1943 to the next level.  It's a lot of fun and easy to play.” - Charles Cabell

"Walked through a demo at Prezcon 2011.  Looks like this is going to be a fun expansion.  I preordered." - Robert Patton