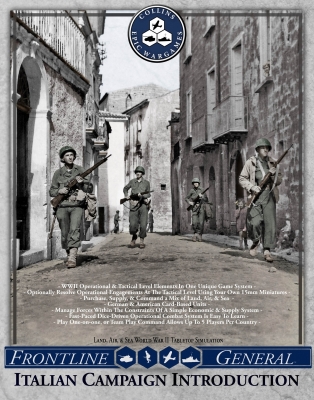 Team Play Command rules allow up to 5 players per side to play against each other as teams that subdivide turn and command responsibilities between one 'Frontline General' and up to four subordinate 'Commanders'.

Units such as Tanks, Vehicles, Emplacements, Aircraft, and Guns require crews. In this way, the 'men behind the machines' may gain experience and improve as the game progresses. They may also be destroyed or captured apart from the Units they crew. This allows interesting situations to occur such as capture of an enemy gun, crewing that Gun using your own crew, and then turning that Gun against the enemy.

A basic Economic System charges players with choosing to procure an effective balance of Units for the objectives at hand. Players must also manage a very basic Supply system at the operational level to ensure Units remain fueled, fed, and supplied with adequate ammunition.

Frontline General: Italian Campaign Introduction is available in two forms - a Free print & play version to let you try out the game and preview the components - and a high quality production version.

“I have barely touched on the possibilities of this game. I foresee great possibilities for this system and am looking forward to further expansions... This is a different type of game and game system is very intriguing and engaging. I think it will gather a nice dedicated following of those who are interested in the Italian Campaign. I can see customers adding scenarios to this gaming system, expanding and extending its vision and capabilities. Frontline General – The Italian Campaign is a unique game system that will provide gamers with hours/weeks/months of “Happy Gaming”! - Richard Mataka www.mataka.org

”Received my game today. I must say, AMAZING! The quality is unbelievable. The amount of stuff in the box is unbelievable. My lack of additional adjectives is unbelievable. But truly top notch production. Having given the rules a quick read through, the rules look detailed, but not overwhelming. I for one look forward to playing out the tactical battles with miniatures.” - Todd Mewborn

”As an old wargamer (53 years old) who has a vast collection of wargames, you bring a fresh wind in our hobby. Also as a Canadian (French from Quebec) who follows everything on wargames, your hybrid concept which integrates the operational and tactical dimensions of warfare merit the attention of our community.” -Pierre Ruel 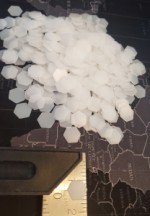